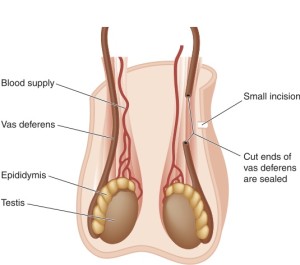 A vasectomy is a safe and reliable method of permanent male contraception. It has minimal complications and over the long term and is much cheaper and safer than other methods of contraception.

The longterm failure rate after vasectomy is 1:1000, which is as low as it can get without abstaining from sex entirely.

The vas deferens (vas) is the tube in the male which carries sperm from the testicle to the ejaculatory ducts. A vasectomy involves dividing the vas and interrupting the passage of sperm into the ejaculate, preventing pregnancy.

The ‘No scalpel vasectomy’ (NSV) popularised at Cornell in New York City and practiced by Perth Urology Clinic has modernized the technique of vasectomy with a ten fold reduction in complications (0.4% for NSV compared to 3.1% for a standard vasectomy) and much less bleeding and pain. The procedure can be performed as a day case through a minimally invasive incision.

After a vasectomy you can expect to be back at work within a few days to one week. A semen analysis will be organized for three months after the procedure to confirm that there are no sperm in the ejaculate. Before this is confirmed, other methods of contraception need to be continued.