Urinary tract infections (UTIs) are a problem for many women and less commonly in some men.  Bacteria often travel from the urethra to the bladder, causing a bladder infection (cystitis). Occasionally, the infection may also affect the kidneys.

Many women suffer with recurrent infections. It is common for women to suffer up to 3 infections a year, but women who get 4 or more infections may need further tests, such as a scan or a bladder inspection (cystoscopy) to look for an underlying cause.

In comparison to women, UTIs  are relatively uncommon in men.  Often it occurs in the older male as part of problems with bladder emptying.  In general, all men with a proven UTI should be referred to a Urologist for further investigations.

Usually, no particular cause can be found. Some women find that sexual intercourse can trigger an infection. Occasionally, recurrent UTIs can be caused by an underlying problem, such as:

It is sometimes necessary to do some tests to rule out an underlying problem, such as a cystoscopy or ultrasound scan.

The first step is to make certain that the symptoms are being caused by bladder infections. Some patients have one of a number of different conditions causing symptoms similar to an infection. These include:

The specialist will take a detailed account of your symptoms and examine you. It may be necessary to send off urine specimens to look for evidence of an infection and so find out which bacteria are causing it.

Your specialist will discuss whether further tests are needed. These might include a cystoscopy (bladder inspection using a telescope) and an ultrasound scan of the tummy.

There are a number of things you can do to prevent urinary tract infections:

Cranberry tablets contain an ingredient which can stop a common bacteria (E. coli)  from attaching to the bladder.

Cranberry supplements should be taken with caution if you take Warfarin tablets.

Oestrogen (a female hormone) may have a protective effect against urinary infections. After the menopause (when the periods have stopped), the oestrogen levels in the body diminish. This can make some women more susceptible to urinary infections, even if they take HRT. Studies have shown that vaginal oestrogen replacement can reduce the number of infection by between 40 and 75%.

Your doctor may recommend treatment with oestrogen pessaries, or a vaginal oestrogen cream.

Studies have shown that a small dose of antibiotic taken every day can reduce the number of infections. This type of treatment is not appropriate for everyone and it is advisable to discuss things with a specialist before starting. The treatment usually needs to be continued for many months or even longer.

For some people, a small dose of antibiotics taken immediately before or after sexual intercourse can be equally as effective as taking antibiotics every day.

Studies have shown that prophylactic antibiotics can reduce the number of infections by up to 85%. Some patients find that they are more susceptible to getting thrush (candida infection) while taking long-term antibiotics.

There is a theory that recurrent UTI’s can be due to a deficiency in the bladders natural defensive barrier – the glycosaminoglycan or ‘GAG’ Layer.  Bladder washes, such as iAlural can be delivered to replenish this layer.  Follow this link for more information about this new and safe therapy. 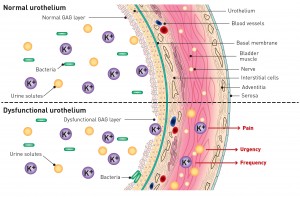 Although probiotics have been used successfully to treat patients with recurrent urinary infections, taking oral probiotics is not usually effective.

Here is a downloadable pamphlet about UTI’s from an American institution: NIDDK UTI Summary